Gameloft is leading in publishing digital and social games, has announced Spider-Man: Unlimited, which is the very first web-runner game.

Gameloft has announced the Spider-Man Unlimited, which is coming on iOS, Android, and Windows Phone in this September. The new game is action based which is contains a lot of costumes and villains. Spiderman do more web hanging than running

Till Spiderman is seemed to be running across New York City to collect yellow vials that demonstrate coins. It is not sure that what you do with coins.

Spider-Man will sling at iconic locations such as the Daily Bugle building in the whole city. players will control the webhead as spiderman moves in air when moving at behind-the-back perspective. Spider-Man will have to escape from lasers and other different obstacles during these segments as he chases enemies as the Green Goblin. 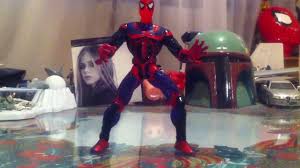 We will see that hero will join with other Spider-Men also in order to help out in the fight. There are different spiderman like, Cosmic Spider-Man, Iron Spider, Bag Man, and Ben Reilly. In total, there are 23 Spider-men for fans to gain and upgrade.

Each villain will fight. Green Goblin has it traditional costume which seems to be in better designs than used in movie, and The Vulture used a new red and black costume.

Spider-Man Unlimited will come in early September 2014 and available for iPhone, iPad, Android, and Windows Phone. In this game spidey can swing, run, and fight with foes in the New York on the edge of destruction.