You are here:- Home/Mobile Apps/Akinator Vip
For many smartphone users, the "phone" part matters less than the "smart" part; it's more important to be able to text message friends than make phone calls. Now we can get you more improved and well filtered apps to solve your daily routine matters. Best android email app, best weather android app and many more mobile phone apps under Utilities android mobile apps, travel apps, Health & Education mobile apps can provide you various ease and manipulation with you daily interests. 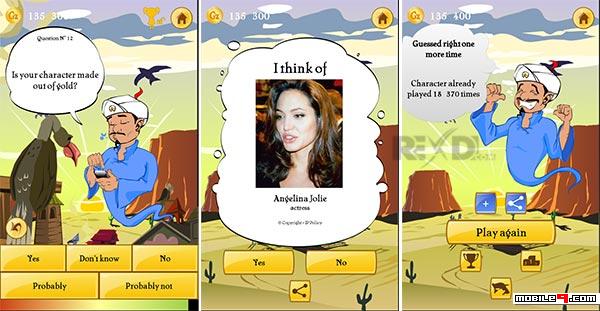 Akinator, the Web Genie (formerly Akinator, the web Genius) is an internet game and mobile app based on Twenty Questions that can attempt to determine which character the player is thinking of by asking them a series of questions. It is an artificial intelligenceprogram that can find and learn the best questions to be asked to the player. Created by three French programmers in 2007, it became worldwide-popular in November 2008, according to Google Trends. In Europe popularity peak was reached in 2009 and Japan in 2010 with the launch of mobile apps by French mobile company SCIMOB, reaching highest ranks on app store . While playing “Akinator” the questions are asked by a cartoon genie.

The famous Genie needs to take up challenge. To help him, go in search for Aki Awards…

Akinator can read your mind and tell you what character you are thinking about, just by asking a few questions. Think of a real or fictional character and Akinator will try to guess who it is. Will you dare challenge the Genie

Discover the new Akinometer, Challenge your friends on the leader boards to prove who is the best. To let your children play safely, turn on the child filter.

GO IN SEARCH FOR AKI AWARDS

Akinator invites you to think outside the box. As you know, he likes to guess characters and takes up challenges ever more difficult. To do that, make him guess forgotten characters, who have not been played for a very long time. Compare your trophies with your friends in Facebook Games.

Thanks to Geniz, you unlock and play with new backgrounds and customize Akinator as you want.The genie will turn into a vampire, a cow-boy or a disco man.

Each day, try to find 5 mysterious characters and win extra Geniz to customize your favorite Genie.

TRY OUT THE MyWorld EXPERIENCE

The talents of Akinator never end! Another surprise from the Genie: with MyWorld, discover a new way of playing. Challenge Akinator even more: make him guess who are your relatives and friends and gather them all into your own galerie MyWorld. Even better! Akinator can guess your friends and relatives even if you are not playing. Impossible?! Pass your mobile to your friends and try out the MyWorld experience… and be ready for the amaze!

Akinator requires an Internet connection to use his magic lamp. Turn on Wifi or be sure to have a data plan.

To select your language, don’t forget to scroll down

VOTE for characters and get more points.

We filter even more valuable smart devices apps for you like best android email app, best weather android app, best android news app, best educational apps for kids and recommended iphone apps that can change the dynamics of your life style.
Setting up excellent use of Akinator Vip on your mobile phone, tablet, smart phone or any other smart device may be more compatible to solve your specific problem. If you can overlook some connectivity, health and education, best travel app android, user interface, security and internet issues in your professional life, these free to download apps like Akinator Vip adds a convenient way to cope with that problem by your smart device.