Now Hasbro is working on the Angry Birds craze again with one of their own brand this time, which is Transformers! Â A mash up similar to Angry Birds Star Wars is coming, now and it is supporting the Transformers as birdies and piggies battling it out.

Now we can say that there will be a new game from Rovio, which have an aunthicate licensed goods, and game products which are featuring Hasbro’s TelePod technology seen before with Angry Birds Star Wars. Now a user can easily check out the official press release and artwork after the break!. 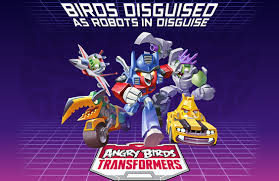 Now we discuss the creator of this game â€œAngry birds â€œand that isÂ  Rovio Entertainment Ltd, and it is a global industry which is changing entertainment media company and its headquartered in Finland that creatively They Â started as a casual game in 2009Â  and now this become international phenomenon within a few months after its release. Nowadays Angry Birds is not only the most downloaded game of all time, but it is a worldwide known entertainment game which isÂ  achieving publishing, licensing, animations, books and location based entertainment

One more thing which is added in this game is that is the new title which will be an installment in the Angry Birds.

The angry bird game is now coming in mobile devices and it is one of the most famous games worldwide which is downloaded and played.

â€œAngry Birds Transformers facilities to their users worldwide with an enjoyment and fun and with new story and characters, and new ways, like our TELEPODS platform, for users to use this brand. They work with Rovio to create opportunities for kids and their families to experience Auto birds and deception across multiple channels and entertainment platforms, for a completely exciting branded experience.â€